Verónique Medrano was four and encantadora (charming) when the world lost Selena and was too young to realize what had transpired.

“I was a ‘90s kid, so I grew up listening to Selena, Emilio, La Mafia, regional pop hits such as ‘El Coco Rayado’ and watching Paquita del Barrio on Mexican television,” Verónique said during an interview at the Hispanic Entertainment Archives. 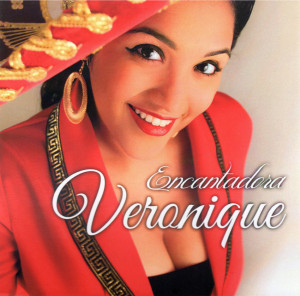 “You see, I grew up ‘On the Border by the Sea’ in the southernmost part of Brownsville (aka La Southmost).  Besides listening to the radio and cassette tapes at home, there was always music in the house because there’s a lot of artistic nature in the family.

“However, it was Selena that inspired me as I sat glued to our TV set watching her on the ‘Johnny Canales Show.’ My mother even took me to the filming of the movie at the Alamodome and later, Norma (Red) won tickets to go see the movie at Cinemark in McAllen.

“Cary Zayas, a KGBT reporter, interviewed me before the movie began and asked me how I felt about watching the show.  I told her I was excited because I thought that I was going to see Selena.  At the end of the movie the realization of her death hit me.  I was uncontrollable and asking countless questions about her now being an angel; and for me, it still hurts,” the now enchanting 23-year-old recording artist recalled with great detail.

Sharp as a tack, Verónique was reading at second-grade level in kindergarten; and when she entered Incarnate Word Academy and Sister Dorothy Salazar saw that she was very special and also recognized her vocal talent, she encouraged her to enter a talent contest. Verónique did and won a box full of huge Crayola’s.

“And the walls of our house still has all those marks,” her mother said with a laugh.

Her aunt Norma Linda González is married to Joseph Mattingly, a Liturgical Music Director for the Newman Center at the University of Iowa in Coralville.  So, between the ages of seven and thirteen, Veronique would visit them during her summer breaks and tour with the Newman Singers as they sang in churches and revivals across the United States, plus attending Christian music conferences in Washington, D.C.; and not to be left out, she even got to sing a couple of solos with her cousin Andy Mattingly.

Then her life went back to normal, that is, until she entered López High School, where she played Top 40 and indie music on the high school’s radio station and joined the school choir.  Her hard work and tenaciousness paid off since she made the Texas Music Educators Association (TMEA) Region XXVIII Vocal Division in 2009. In the spring of 2009 she was a part of the All-State Choir, and went to San Antonio and performed at the Lila Cockrell Theatre.

After all was said and done in a series of competitions that started out with 15,000 contestants, her vocal talent took her all the way to the finals against the best ten in the state. She ended with the distinct title of ‘TMEA’s 2009 Region XXVIII State Choir, Alto II’ and her prize was a trip to New York City where the 18-year-old Aquarian got to perform at the Lincoln Center.  Now how many young Tejano singers can match that?

“It was on a Memorial Day weekend and I got to take my parents, we ate at Tavern on the Green and we went to check out a few Broadway plays.

“I saw ‘Phantom of the Opera’ and all its pomp and circumstance and I said to myself, ‘This is amazing. I need to do this and I don’t care if it’s Broadway or a theater at any big city.’ And that’s when the professional bug bit me!” 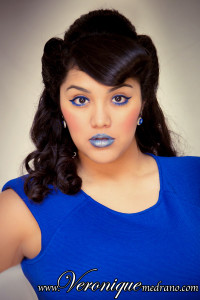 Back in Texas, a strong believer in education, she attended UT Brownsville her freshman and sophomore years where she was part of the UTB/TSC Master Chorale and Mariachi alumni.  If that was not enough, she also hosted “Sting Radio,” an on-line weekly one-hour program; she then finished her last two years at UT Pan-Am (UTPA). During her junior year, Veronique produced a documentary on the Queen Isabella Causeway collapse titled ‘The Queens Collapse” and it got so much attention that it was featured at Cine El Rey.  She finished her senior year as the television station manager at UTPA Bronc TV.

In May 2013, Veronique graduated with a Bachelor’s degree in English, a minor in philosophy and now it was time to get serious about music. However, everyone needs to be gainfully employed in order to survive.  “I was literally blessed because I got hired as a digital multi-media manager right after graduation,” Veronique said.

Her entry into Tejano music began with “Te Dejo Claro,” and “Te Equivocaste Conmigo,” both written by Rogelio Banda.

“For ‘Encantadora,’ I teamed up with Guillermo Martínez, who is an incredible songwriter and has written for Control and Grupo Azido among other Latin artists.  My awesome producer, Santiago Castillo, plays six different instruments on this project and also wrote ‘Que Dolor.’  It was important for me to work with individuals who understood my voice and were willing to work with my ideas.”

As for the CD’s content, both versions of “Si Tu No Vuelves” are absolutely, spine tinkling, beautiful. “Hola” is a simply entrancing duet with Guillermo, but the stand-out song in this CD is “TekJano Jam.”  “It’s one of the songs that I wrote,” the 5-feet-7-inch tall warbler said beaming with pride.

“Selena left the torch there for someone to take and I wanted to grab that torch and I do not want to compare myself to Selena, but when you listen to this album, you will hear that I am trying to go where she was going had she lived.

Asked for a closing statement for her Piñata Army (fans), the enchantress responded, “I love my fans and I want my Piñata Army to be a part of my musical journey.  Change does not occur over-night, music styles differ with each generation, and together we can be a part of that change.

“Every step has been a big labor of love, but as for my immediate goals, I would love to perform at the Tejano Music Awards.

For booking and personal appearances, contact her manager, Norma Red at (956) 639-3440. We also recommend you check out her webpage at www.veroniquemedrano.com for lots more information and a slew of great photographs by Rocío “Yeey Click” Velásquez and as Verónique says, “Follow me and all of my shenanigans on my Facebook, Twitter or Instagram.”