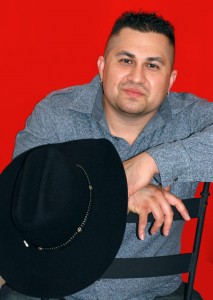 Servando Ramos is well in the way to become Tejano music’s next major superstar.

Unless you’re familiar with Ramos, if you haven’t heard or seen this rising newcomer in action, be ready to be get your socks knocked off with his assertive “taca taca” accordion style.

“My accordion style is heavier and more up tempo with a little spark, a little more taca taca,” the 32-year-old singer-songwriter-musician said during an interview at the Hispanic Entertainment Archives office.

His grandparents, Frank and Rachel Ramos, were the type of ballroom dancers that today one sees on “Dancing with the Stars.” His father, David Ramos, played drums with Houston’s Neto Pérez and the Originals; and his uncle, Joe Ramos, played with Sunny and the Sunliners. So needless to say, Servando was exposed to Tejano music since birth.

“I grew up seeing my grandparents dance in our living room and seeing my father play drums, bongos and maracas in Sunday afternoon jam sessions at home,” the Pasadena, Texas-native recalled. “And as a small tot, I knew how to record, rewind and play back on a small tape recorder. So I’d walk around recording my dad’s practice sessions at a time when my favorite songs were ‘Por Está Calle Vives’ and ‘El Chubasco.’

Following in his father’s footsteps, Ramos played drums at home and at churches, was first chair on snare drums at Thompson Intermediate; and played percussion with the Dobie High School marching band.

He was 14 when his mother developed an interest in learning the accordion and a music teacher came over to their house to teach her the basic scales, but she couldn’t catch on. Meanwhile, Ramos, who had been watching, did the scale in five minutes and by the time the instructor left, he was able to play “Las Mañanitas.”

“Playing drums helped me with rhythm and tempo because the beat has to be right on, so that now makes me more in tune with the drummer when I play accordion,” he explained.

While his name is new to most people and “Taca Taca” is his second compact disc as a solo artist, Ramos had been performing since 1994 when at 16; he joined Regreso Band de Charlie Montemayor and developed a reputation as one of the best accordion players in the Houston area.

By the time they recorded the Ramos penned “No Regreses Mas” for their “Contigo Estar” CD. Ramos’ style also started to be more noticeable and he was standing out from other accordionists.

“I played different because I have that feel in the music. I had a certain tempo in my spirit and my body and soul would move with the rhythm of the accordion,” Ramos said.

“People would look at me and say I moved like Little Richard when he played the piano. The truth is that I couldn’t control the feelings I had in my body and to this day, I still can’t. So I have to turn, make my moves and walk from one end of the stage to the other.”

At the turn of the century Grupo Fiel was in tight competition with Aviso as both toured throughout Texas. This lasted until 2004 when creative differences among the band compelled Ramos to leave.

“The differences gave me the nudge I needed and it was a blessing because it moved me forward to where I am now. But first I did a two-year stint with Lisa (Torres-Miranda) y Aventura during which we recorded a CD that was never released.”

Mid 2006 was the first major turning point for the accordionist, who up to this point had only been heard on harmony, back-up vocals and perhaps one or two songs. He learned everything he could learn about the recording side of the industry from books and the internet, then opened Texas Sound Studios and started working on the production side. Still, he missed being on stage and in January 2008, rejoined La Traizión.

As fate would have it, that same year, a former high school classmate contacted Ramos for a gig. To kill two birds with one stone, he went to one of her two hair salons for a haircut and to talk business; and he wound up with the gig plus a date.

“I reconnected with her and I never left,” Ramos said as he flashed a big smile.

He married the former Ana María Ibarra on November 20, 2009 and she gave him the confidence he needed to take the next step.

“I loved to sing and I had memorized over 500 songs; and now that I had my own studio I recorded my own voice. But I sounded weird and I wasn’t comfortable listening to my own voice. However, she told me I sounded good, that I had the talent, encouraged me to go for it and pushed me to get my own thing going.

“I was also tired of waiting around and I realized that if you want to do something right, you have to do it yourself, so we moved forward with our plan.

“We came up with Los Texas Outlaws as the name for the band because we wanted something that showed that we were going out on the limb and do something different, something against the law that puts limits on everything.”

“I wanted to set a new mark for a new generation of Tejanos with something new.’ Therefore the theme for our first CD was a train because we wanted to get on the train and start hitting each town and winning the hearts of people.

“I was fortunate that everybody liked m voice on ‘Traime Una Bironga’ because it got me to where I am now.”

This year, Ramos released the catchy “Taca Taca” on his own Texas Star label. Other tunes are “Te Amo,” “Mi Trokita,” the Selena-loss inspired “Si Estuvieras Aqui,” “Que Bonito,” the double co notational “Saca La Mangera,” “Sangre Alteña,” “Ya Te Olvide” and the haunting accordion laced “Me Dijo No,” based on “Land of a 1,000 Dances” and which will made into a video introducing new cumbia dance steps.

The CD also features three guest soloists, Aviso’s Chris Q on “Hotel California,” Jesse Fonseca on “Back at One” and Jenne Celine Madrid on “Princesita de Tejas,” which Ramos specifically wrote for her.

Ramos, who is always clad in western garb, is a full-time computer wizard at the NASA Houston Space Center.

“Most of my gigs are on weekends, but I’m also fortunate to have a pretty flexible schedule and most important, a very supportive boss,” the space cowboy said of his employer.