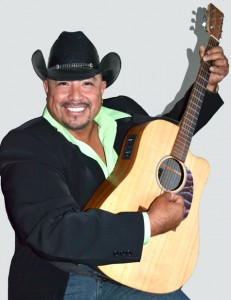 Artie V is unique in that he is incorporating his rap, funk and hip hop music background plus a touch of norteño into standard Tejano tunes.

On his mother’s (Mary Ramírez) side, one of his cousins is Luis Martínez, a Stockton, California based singer/musician that is more into boleros and romantic trios.

“It stands to reason that my grandfather, Nick Villarreal Jr., my tio Nick (III) and Luis were my first musical influence because my dad would take me to see them perform at their ranch in Lytle, Texas since I could walk,” Artie said during an interview at the Hispanic Entertainment Archives.

“I remember I was seven when I went to see my uncle at Randy’s Ballroom and it was packed, people were laughing and having such a good time, they seemed to have forgotten about all their problems by listening and dancing to the music.

“After the show I asked, ‘How much do you have to pay them to let you sing?’ My uncle laughed and said, ‘No mi’jo, they pay me.’ And that’s when I said, ‘That’s what I want to do.’

“At twelve, my dad gave me my first guitar and my cousin Luis showed me my first chord when he came down from California. After that, I took off on my own,” the 43-year-old vocalist/musician continued.

When he turned fifteen, Artie started doing solo acoustic sets at small house parties and sitting in with bands such as Bandango, which marked his first time on stage. Then he tied up with Tom Reyes and other musicians to form an unnamed combo. A year later, the now bass guitar player and saxophonist Richard Hughes formed The Executones and did their first professional gig.

“I’ll never forget that night when we had keyboards, guitar, bass and vocals all coming out of one speaker and we blew that speaker.”

After they added Charlie Ybarra on keyboards; Raúl De La Garza, guitar; Jerome Jasso on drums and vocals, plus Ronnie Saldaña on sound, they evolved into Shasá and they rose to a new level in popularity.

In 1986, the Thomas Jefferson High School graduate and Shasá parted ways. Artie got into The Cure and Depeche Mode and shifted musical gears.

“I formed a new wave industrial music band with Mark Martínez, keyboards; Roland Carnavali, keyboards and bass, Eddie Rivas, drums and myself on keyboards and vocals. We called ourselves Arpeggio and yes, we had three keyboards.”

Before they knew it, Arpeggio was performing at all the Chelsea Street Pubs and most of the Riverwalk clubs. Saldaña had since become Rio Band’s soundman when he brought Artie’s vocal talents to Emilio Navaira’s attention and Navaira went to check him out.

“Emilio said he could get me signed up to Capitol-EMI, but this was no overnight feat, I didn’t want to leave the guys and they understood I was shifting to Tejano music because I always wanted to record, but I was unable to because the hip hop market is completely different.

“All of a sudden, I had to put a Tejano group together quick and that’s how Grupo Latino – Artie, lead vocals; Joe Martínez, accordion; Steve Pérez, keyboards; Rock, guitar; Julian Escobedo, bass; and Roland Luna, drums.

“Next Emilio hired me as his bodyguard. This is the reason I named my compact disc, ‘The Body Guard.’ Raulito Navaira came in as our manager and Emilio’s booking agents, Johnny and Joe Casias also became our agents in 1993.

“Wherever Emilio played, we played,” Artie continued. “How lucky is that? We went from playing little bars and clubs to doing big halls, prestigious clubs and stadiums, from performing for as few as 20 people to an ocean of 70,000 people at Galveston Beach on the same bill with Emilio, Selena and Carlos Miranda Jr. and Grupo Metal.

“I remember looking out at the sea of people and saying, ‘Where did all these Mexicans come from?’ and the audience cracked up with laughter.”

Grupo Latino’s first hit, “Perdoname” penned by Raulito, got heavy rotation in radio stations all over Texas and according to Artie, made No. 1 on KXTN’s charts. “Ay Dios Mio,” written by Artie’s mother also did well.

Meanwhile Artie juggled music and shift work as a mental health worker with behavioral problem kids at the Southwest Mental Hospital for Adolescents.

After five years as Emilio’s opening act, Artie and Grupo Latino went on their own way. By now they were so well known, they were able to share the same stage with Mazz, La Mafia, Selena, La Sombra, Roberto Pulido, La Fiebre, David Lee Garza, Tropa F plus Dee and Culturas, who Artie had worked with when Dee headed La Franz.

“After a while, circa 1996, I got tired of being the road and being away from my family and kids. So I gave up the road and quit singing all together, completely, and I became a corrections officer.

The year 2001 found Artie moonlighting as a club DJ at Cattleman’s and Cool Arrows where he also did karaoke. Impressed by his voice, club goers would go up to him and say, “Why are you doing this when you have a good voice,” but that was it.

In 2003, the Alamo City native became an iron worker and moved to Corpus Christi and it was here, working 150 feet up in the air at oil refineries that he arose to new heights.

Ten years after giving up the road, Pete Ybarra, Emilio’s former accordionist and Artie’s fishing buddy, suggested they form a band and this time Artie was ready. Hughes, saxophone; Kike Esquivel, guitar; Fito Riojas, bass; and Luna, drums; filled the gap and made up what they named Grupo Suave.

After the release of “The Iron Horse” CD on John Villanueva’s New Village Records, Ybarra quit to start Grupo Fuego.

This year, after over a quarter century of performing, Artie V was ironically nominated “New Upcoming Artist of the Year” by the Texas Talent Musicians Association (TTMA).

Ben Ramos, accordion; Zophar, guitar; Xavier, bass; and Martín Martínez, drums; now make up Grupo Suave and they are presently in the studio recording a new compact disc with a new twist in musical genres.

“Our style is like Tejano and lite norteño, which is a hint or touch of norteño. It’s more like progressive conjunto because I added a little bit of hip hop and funk into our arrangements. I also threw in some Colombian vallenato and we ever rap in our Colombianas,” Artie explained of his musical evolution. “So ‘Cowboy Up’ should be wrapped up pretty soon.”

Artie V y Grupo Suave will be performing at Club Movida on Friday, November 4 and November 26. For bookings call Artie at (210) 296-5003. For more information, also check out www.artievsuave.com or www.myspace.com/gruposuave.